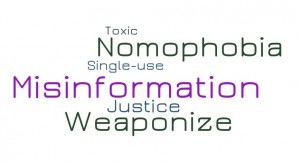 Do these words capture the mood of your 2018? They do for many people, according to the various dictionaries and online sources that track the topics we search for online.

Here are the Words of the Year for 2018 that caught the public’s imagination, showed widespread use or reflected important events, people and preoccupations:

Collins English Dictionary: Single-use
Collins creates an annual list of “new and notable words that reflect an ever-evolving culture and the preoccupations of those who use it.” For 2018, single-use rose to the top, referring to products (often plastic) used only once before disposal.

Dictionary.com: Misinformation
Dictionary.com’s choice “serves as a symbol of each year’s most meaningful events and lookup trends.” For 2018, they chose misinformation, meaning “false information that is spread, regardless of whether there is intent to mislead.”

Global Language Monitor: Weaponize
GLM chooses a word of the year based on global statistical analysis of the “English Linguasphere.” For the U.S. in 2018, they selected weaponize, where “any word, action, or deed can and will be weaponized” or used to silence the opposition.

Merriam-Webster: Justice
Merriam-Webster tallies which words were looked up more this year than the previous year. For 2018, more people (74% more than in 2017) looked up justice, perhaps due to a steady stream of stories about racial, social and economic justice (or injustice).

Oxford Dictionaries: Toxic
The Oxford Word of the Year reflects “the ethos, mood, or preoccupations of the passing year, and [has] lasting potential as a term of cultural significance.” For 2018, they chose toxic due to a 45% rise in the number of times it was looked up. Toxic also saw use in a number of contexts: chemical (the nerve agent poisoning of a former Russian intelligence officer), masculinity , relationship, culture, toxic waste, toxic relationships.

Oxford English Dictionary:
The OED doesn’t choose a word of the year, but revises and adds entries each quarter. The December update includes more than 600 new words, senses and subentries, including drain the swamp (removing an entrenched and harmful influence); Dylanesque (resembling or reminiscent of Bob Dylan or his work); and facepalm (a gesture where you bring the palm of your hand to your face to express dismay, exasperation, embarrassment or other emotion).

Meanwhile, in other annual word news:

What words would you banish? What word captured your mood in 2018?