Reel in reader attention with captions that captivate 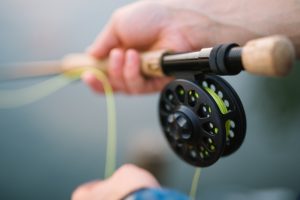 Your readers might just skim your text (sorry!), but chances are they’ll look more closely at the headline, photo and caption. Ideally, those three elements together should tell most of the story, in case the reader bypasses the rest of the article altogether.

Photos “attract even the most casual reader, so captions are probably the most-read words…after headlines,” says The Canadian Press Stylebook. Here are some do’s and don’ts for captivating captions (also called cutlines) that are worth the read:

DO tell a story or convey your main message in the caption. Add something that might encourage skimmers to read the full article, or add something new that didn’t make the story.
DON’T tell the whole story. Let the caption lead readers to the article for more details.
DON’T be boring. Aim for “informative, interesting and lively,” says The Canadian Press Stylebook.

DO explain the unknown; tell readers something they don’t know by looking at the photo, such as a result.
DON’T state the obvious. Readers can see that “Sue Horner holds a trophy;” they want to know, why?

DO explain when and where the action is taking place, if appropriate.
DON’T put this information first, unless the date or location (the Titanic?) is the most important point of the story. Even then, the reason you’re talking about the date or location is probably more to the point.

DO add new information and context. “Don’t merely repeat the story headline or summary, and avoid stating the obvious elements that are captured in the image,” says The Poynter Institute.
DON’T duplicate what the reader can see (Sue holding a trophy) or might read in the full story. Use some information from the article to explain what’s going on or why.
DON’T say someone “looks on” or “is shown.” Zzz.

DO explain the action in the photo and tie the details to the article, but stick to the facts.
DON’T assume or guess what someone is thinking or doing. As the Stylebook says, “a ‘dozing’ legislator may be reading.

DO say where your information comes from, if you mention action not seen in the photo (“Organizers say more than 500 employees signed up”).
DON’T leave the reader to wonder if you have a credible source or you are guessing. 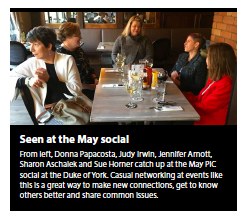 DO consider using a simple photo and longer caption instead of a full article when the topic doesn’t need one. The example here is from a networking event that didn’t need more than this: some of the people there, where it was and gentle hint at why readers might want to attend the next event.
DON’T repeat the information from the caption in an article that has nothing more to add.

DO write conversationally, as if you’re talking to a friend or family member. Keep to a second-grade reading level so the caption can be easily understood.
DON’T use jargon or clichés.

DO keep captions short, about one to three sentences. “Like headlines, captions must be crisp,” says the  Stylebook. Ann Wylie suggests 14 to 21 words, or a couple of lines in print.
DON’T follow this rule to the letter if an extra sentence will add interesting or necessary detail to help the reader understand the situation.
DON’T try to cram every bit of information into one long, involved, boring sentence. Especially leave out people’s titles; save these for the full article.

DO identify everyone in the photo, if not name by name, as a group. “Sue Horner, far left, leads a group of writers in Buzzword Bingo.” Double-check that you’ve spelled the names correctly.
DON’T forget to count the number of people in the photo and have a matching number of names.

DO use alphabetical order to identify people who don’t appear in the photo (if you must include them; and yes, some people will insist on it). Otherwise, you imply some kind of rank.
DON’T include names of people who aren’t in the photo, if possible. Instead, identify the missing people within the article itself, or mention that the people pictured “are part of the team” that worked on the project you’re describing, for example.

DO identify people from left to right. It’s okay to say “from left” or (left to right) or (L to R), according to your style guide. Don’t have a guide? Just be consistent.
DON’T say “left to right” if there are only two people shown. Identify one with location (“Sue Horner, left”); the other name is obviously “right” so adding the word is unnecessary.

DO write the first sentence in the present tense. You’re describing what’s happening as the photo is taken and putting the reader in the picture.
DON’T mix tenses within the same sentence. A second sentence giving context can explain what happened in the past leading up to the action.

DO get permission to use the photo and credit the photographer in the caption.
DON’T use photos without permission. If you don’t have a budget to buy a custom photo, try stock photo sources like Unsplash and Pixabay.

And one final DO: Do your best to make the caption worth the reader’s time.

Do you have any other tips for great captions? Please share in the comments.

Image: Carl Heyerdahl and Unsplash.This post updates one from 2014 and also appears in my newsletter. Wordnerdery is a quick read about words, effective/expressive writing, newsletters and more. Are you a subscriber yet? If yes, thanks for reading! If not, you can sign up right now. In keeping with Canada’s anti-spam laws and just plain good manners, you can easily unsubscribe any time.

Related reading:
What about sentence fragments in captions? Ditch the fragments

« Boring topic? Here are 3 tips to spin your ‘straw’ into gold
Before & after: Office 365 gets a name change »