Let’s not let others be treated as ‘less than‘ 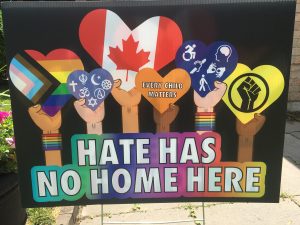 What a great sign! I’ve seen a few of these in my neighbourhood.

They weren’t hugged, even though some were as young as three. They weren’t comforted at being separated from their families. They weren’t fed properly or protected from abuse.

And at a former residential school in Kamloops, B.C., 215 Indigenous children were buried in unmarked graves. The Tk’emlúps te Secwépemc First Nation shared the news of the discovery on May 31, evidence of the long history of Indigenous people in Canada being treated as less than white settlers.

On June 5, on a warm weekend on Toronto Island, a group of at least three people shouted homophobic slurs at 24-year-old David Gomez. The group then punched and kicked him, broke his nose and left him unconscious.

Madiha Salman, 44, was working on her Master’s degree at Western University in London, Ontario. Her husband, Salman Afzaal, 46, was a physiotherapist, helping seniors maintain their mobility and independence. Daughter Yumna, 15, painted a beautiful mural at her school; son Fayez, 9, attended London Islamic School. All were out for an evening walk with Salman’s mother, Talat Afzaal, 74, on June 8. All but Fayez were killed in a hate crime when a man deliberately drove his truck into them for “walking while Muslim,” as CBC The National correspondent Ginella Massa called it. 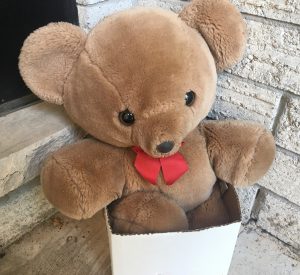 Many Canadians left teddy bears on their front steps to honour the 215 Indigenous children buried in an unmarked grave in B.C. Flags in communities across Canada, including my town of Oakville, were lowered for 215 hours, and residents placed 215 pairs of shoes as memorials at city halls, schools and other public spaces.

This, on top of the recent rise in hate crimes against those of Asian descent. Just one example happened in March, when a man repeatedly kicked 65-year-old Vilma Kari in front of a luxury New York City apartment building. A security guard watched, then closed the door to the building.

This, on top of years of racism made top of mind for the world in 2020 with the murders of 25-year-old Ahmaud Arbery, shot for jogging while Black, and 46-year-old George Floyd, arrested on suspicion of using a counterfeit $20 bill.

I normally blog towards the end of each week, but I had no words after the news of the discovery of the graves of the Indigenous children. The same thing happened the next week, with the killing of the Afzaal family.

What the hell is wrong with people?

I truly believe there are more good people in the world than bad, and of course my skin allows that to be my experience. But some days, the good people are drowned out by the increasingly blatantly racist bad.

It’s hard to know what one person can do to make a difference, but we can do better. At the very least, we can start small. Maybe it’s with our words, making sure they are inclusive. Or it’s with our actions, stepping in when we hear someone being treated as “other” or “less than” or “different.” It’s speaking up to let racists know their words and actions are unacceptable.

Stewart Reynolds, also known as Brittlestar (“the Internet’s Favourite Dad”) put it this way in his newsletter:

“It’s important to let people clearly know where you stand if you want people to know where you don’t stand. It’s certainly not easy but little things count.”

And as a relative reportedly said at the funeral of the Afzaal family, in response to people asking what they can do to help:

“Be examples of love and compassion. Learn from someone who doesn’t look the same as you. Inspire others with your affection.”

Let’s stop letting others be treated as “less than.”

« He/she/they: Here’s why it’s actually kind to share your personal pronouns
Side parts are out; newsletters are back (Wordnerdery) »