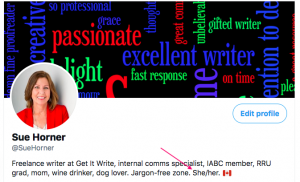 It’s not about me.

That’s what I’ve realized about adding “she/her” to my profiles on LinkedIn, Twitter, Zoom and elsewhere. Here’s why.

The pronouns we use when speaking of someone often imply a gender, such as “she”  or “her” to refer to a woman or girl. That’s not an issue for me – privilege alert! – because I was born and identify as a “she” and my hair, clothing, makeup, etc. matches. (This is also known as cisgender.) So you’ll assume you can refer to me as “she,” and you’d be right.

But what if that’s not the case?

We learned this month that we should use “they/them” to refer to pop star Demi Lovato, who came out as non-binary. That means they experience their gender identity/expression as falling outside the binary categories of male or female.

Some people may also use “they/them” pronouns just because they don’t want to go by pronouns that have a gender association. (When you think of it, that’s not too different from the folks who use “Ms.” in a situation where they don’t think their marital status is relevant.)

For those of us who grew up in a binary world, it can be a lot to wrap your head around, as a Fast Company article notes.

The article also points out that the majority of both Millennials and Gen Z believe that gender should be seen as a spectrum and that binary (male or female) is outdated.

So by adding pronouns to your online profiles, you’re recognizing there is a spectrum of gender. You’re showing that anyone can feel comfortable saying what pronouns they use. You’re being welcoming and inclusive and kind. Using someone’s correct personal pronouns is also a way to respect them, just as using and correctly pronouncing a person’s name can be a way to respect them.

In a totally non-scientific poll, I asked some people why they’ve added pronouns to their various profiles. Here are some of the replies:

Now, we’re being challenged to understand and accept that some people experience and express their gender in a way that falls outside the binary categories of male or female. Our language needs to keep up. One example might be when addressing a crowd, to say “Hello everyone” or “Welcome friends” instead of “Good evening, ladies and gentlemen.” Or in documents, surveys, sign-up forms or other places, consider whether you really need to ask people to identify as male or female. If so, can you provide a third option: “Male/Female/Other” or “M/F/X” (as Canadian passports now offer)?

As the Fast Company article points out, “Gender is complex, and the language we use to talk about it is changing quickly.”

And as I always say, words matter. Let’s do what we can to keep up with the changes, and to be inclusive.

Note: Since posting this, I ran across this helpful read about non-binary by Jenny Lawson, aka The Bloggess. I especially like this line: “Turns out that this is about the same thing as my grandma saying, ‘People weren’t as gay when I was young.’ They totally were but they just weren’t in the position to openly be who they are.”

I will admit to struggling with this myself, and please let me know if I’ve messed it up or what I’ve left out. What do YOU think? And what are other ways we can be more inclusive?

« Before & after: 5K run release (Wordnerdery)
Let’s not let others be treated as ‘less than‘ »