Snowboarder jargon and insider language at the Olympics, decoded 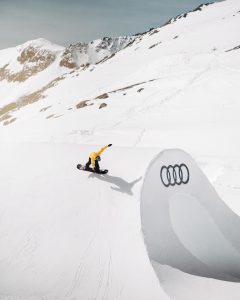 The 2022 winter Olympics are in full swing, and so is the insider language.

Normally I recommend using words people understand and explaining jargon, acronyms and unusual terms. Announcers during fast-paced Olympic sports don’t have time for that, or they assume viewers are familiar with the terms. Curling fans know all about buttons, draws and hammers, for instance. Those who adore ice skating wait for every triple Salchow, quad and twizzle.

The snowboarders are particularly fascinating. They don’t just have their own terms, it’s almost their own language. And because I’m the kind of person who looks up weird or unknown words, I had to dig in.

First, a number of recurring terms that are helpful to know:

Now here are some of the tricks I heard announcers call out, celebrate and lose their minds over: 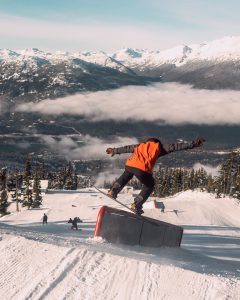 This results in a dizzying combination of moves. As NBC Olympics says, “The names of tricks will often include the spin direction, number of corks (if any), degree of rotation and type of grab.” Grabs add control in the air and style to the jump.

Thus a rider might land a switch backside triple cork 1440 mute grab. This means the rider approaches the jump in their unnatural stance (switch), starts the trick by spinning a backside rotation, at the same time doing three inverts (triple cork) and four full rotations (1440) in the air while holding a mute grab.

Got it? Me either.

There are many more terms, of course, and plenty of heart-stopping moves. So hats (or helmets) off to the snowboarders for their amazing talents. I might be able to briefly handle a butt check before wiping out!

First photo by Karl Köhler on Unsplash, taken in Austria in 2018.
Photo of riding the rails by Benjamin Hayward on Unsplash taken in Whistler, BC in 2022.

Related reading:
Snowboarding “grab” directory
Jargon and insider language? The 2016 Summer Olympics had ’em
“Curlingspeak” from the 2010 Vancouver Winter Olympics
Sports announcers get away with jargon, but don’t try this at home

« ICYMI, January edition: Writing tips, words and more links you might have missed
Be inspired by a ‘Post-it note’ for the brain + more analogies (Wordnerdery) »