Shh – my secrets to (sort of) success with Wordle 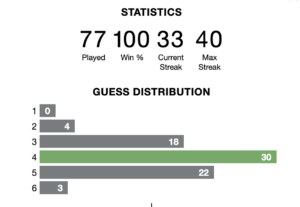 Have you been swept up in the word craze that is Wordle?

My hand is up. Yes, I start my online day with Wordle, followed by its Canadian cousin, Canuckle. Can you call yourself a word nerd if you don’t?

Part of each game’s appeal is there’s just one five-letter word to guess, and six tries to guess it.  There’s no rabbit hole to fall down. You can’t lose hours in it ­– well, unless you spend way too much time analyzing and thinking. (Don’t. It’s not chess.)

As of this week, I’ve played 77 times and hadn’t given up once. It most often takes me four tries, and my best score was nailing it in two. Here’s how I’ve fine-tuned my approach since that first addictive play:

Let’s face it, you’re unlikely to magically pick the right word on your first try unless you’re running sophisticated mathematical programs, or really lucky. So pick a starter word that has as many vowels as possible to help you narrow your options. Examples: adieu – irate – urine – aides – canoe.

I used to make my second try using the results of the first. Now, unless the word seems obvious, a more successful move is try to eliminate more letters. Look at the letters you haven’t yet used and make a word with as many as possible. Also helpful is finding out if “s” or “y” is involved.

With two rounds of guesses, you should have some clues. (Not always. I recently had solid greys after two, so I just kept creating words with unused letters.) Start thinking about possible words. Sometimes it’s helpful to work out some possibilities with pencil and paper, like playing Hangman. Pay attention! Sometimes in my rush to play what I think is a great word I leave out one of the yellows. Oops.

This is annoying, but Wordle won’t tell you if your correct guess appears more than once. I think it should be like Wheel of Fortune: If your guess appears anywhere, it should be revealed everywhere. It isn’t. “Robot” was one that recently had people up in arms. Still, I wait until later moves to throw in a double letter. 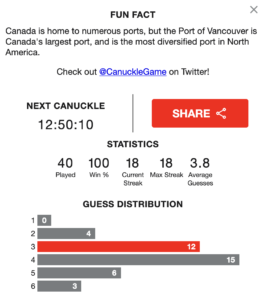 Canuckle follows the same sequence as Wordle, but its words have some tie to Canada. It also posts a “fun fact” about the word explaining the link. Apparently the Canucks behind Canuckle have enough words to take us to Canada Day, July 1.

I used to try to think up vaguely Canadian starter words, but what’s a Canadian word? Oh, like bacon, syrup, canoe, kayak and sorry. Now I start out looking to confirm or eliminate, as I do with Wordle. Once I have a couple of letters, then I focus my guesses on Canada. I’m doing better here, but still hitting four tries fairly often.

If you can’t get enough Wordle, there’s now a whole range of spinoffs, like Heardle (where you guess a song in short clips) and Sweardle (the potty-mouthed four-letter game; turns out I don’t know enough swearwords for this).

Are you a Wordle fan? What are your best tips? Please share!

« Explain acronyms to break the ‘Curse of Knowledge’ (Wordnerdery)
ICYMI, March edition: Readability + inclusive language links you might have missed »