Five! Is too many! 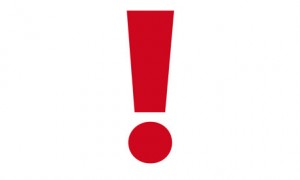 Please tell my client that five exclamation points (or exclamation marks, if you prefer) in six sentences is too many.

Last week I edited an annual report written by a non-profit group. Knowing the group wanted “donor-centric” copy, I deliberately left tone and style alone. Instead, I did things that aimed for consistency, accuracy and ease of reading a sentence, like fixing typos and adding capital letters and commas where they were needed and removing them where they weren’t.

But then I came to five! exclamation marks! in just six sentences! I suggested changing three into periods, which I thought showed restraint.

The client resisted, saying that she thought being conversational (meaning those exclamations) meant that “a lot of traditional grammar will be going right out of the window.”

I respectfully disagreed. Grammar is important even in a friendly, conversational piece. Done correctly, it doesn’t get in the way of conversational; it just helps the structure get out of the way of the meaning.

One of the problems with so many exclamations — besides annoying many readers — is it dilutes the importance of these sentences. The Canadian Writer’s Handbook says the exclamation point is appropriate for:

“emphatic surprise, emphatic query, or strong emotion,” but cautions, “Try to make your sentences appropriately emphatic without resorting to this sometimes artificial device.”

“grammarians have warned us to be wary of the exclamation mark, mainly because…it still shouts, flashes like neon, and jumps up and down…I suppose the rule is: only use an exclamation mark when you are absolutely sure you require such a big effect.”

She quotes H.W. Fowler as saying,

“An excessive use of exclamation marks is a certain indication of an unpractised writer or of one who wants to add a spurious dash of sensation to something unsensational.”

My friend and colleague Amy Sept calls the overuse of exclamation marks “hyperventilating” (a term I love). She quotes an email she received with a four-sentence paragraph in which every sentence ended with an exclamation, saying, “After one brief paragraph, I felt like I was facing a too-perky barista waiting for my morning coffee — and they weren’t handing it over.”

CP Style, as Amy notes, says to use the exclamation mark “to denote great surprise, a command, deep emotion, emphasis and sarcasm” and not “to end a mildly exclamatory sentence.” Hear, hear!

Related reading:
Is it curtains for the ‘full stop’?

« No respect for words
IABC11 – yes, another excellent adventure »