Here’s the TL;DNR (too long; did not read) for this post: The term man-hours is outdated and politically incorrect.

This week, more than 4.47 billion people wanted to know the meaning of “man-hours.” Google Trends shows fairly regular search traffic for it over the past five years, and my original post about it in 2016 has been one of the most-viewed on this blog. 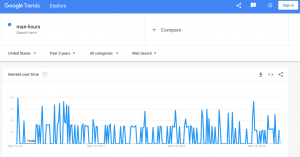 I first ran across the term while interviewing a client’s internal expert about a recent maintenance shutdown, and it stopped me in my tracks.

When the expert mentioned how many “man-hours” were involved, I asked if his crew was all men, and he said no, there were a few women. Pointing out that I, too, was female, I asked if he would object to using a gender-neutral term.

We laughed – although I was serious – and he agreed that an alternate would be fine. Work-hours or staff-hours would be my preference, or you could also use the more awkward person-hours.

It may seem like an overreaction, especially to men, but “biased language distorts perceptions,” says Words That Count Women In, a publication produced by the Ontario Women’s Directorate. “When they read the words ‘man’ or ‘he,’ people of all ages tend to picture males.” It subtly suggests only males can perform certain work or hold certain jobs. 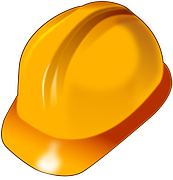 The term apparently reflects more than 60 minutes of work, or reflects actual time spent on a task, which might be 5.6 hours in an eight-hour work day. One formula I found was based on 10 hours per day times five working days times the number of employees on the job, with adjustments for holidays. The term also seems to cover possibilities and estimates (emphasis mine in the follow definitions):

So, maybe a “work-hour” is useful for forecasting. But it seems the more accurate answer to my question about how much time a job took would be a certain number of actual hours, days or weeks, don’t you think? Especially for an employee newsletter article.

By the way, my latest search for man-hours turned up this question: “Is ‘man hours’ politically correct?” Instead of “No, it’s outdated and politically incorrect,” I was stunned to see this answer: “Yes, the term ‘man hours’ is gender-neutral, and appropriate for the workplace.” Wrong, wrong, wrong.

Also, the publication I mentioned earlier was produced in 1993. Why am I still lobbying for other terms besides “man-hour”? And who’s with me?

« Before & after: Office 365 gets a name change
The ‘cadence’ of jargon is stepping up »